My Cafetiere cost is all done - wonderfully easy!  I used DK from my stash (hidden in the big wooden box).  Cast on 30 stitches and it fit my mini cafetiere perfectly.  I hemmed the ends and used Swiss darning down the sides to keep the piece flat.  More roses and leaves to decorate the middle plus another heart button and it matches the Kindle cover nicely!
I sewed a lining to the back to keep the knitting firm and prevent it from stretching out of shape.
Remind me to take a picture of both the cosy and Kindle cover together!!
Posted by Mad Knitter at 09:04 No comments:

I've finished the Kindle cover which was relatively easy, except for one hassle:  I grafted the bottom end with Kitchener stitch to make it look smooth and professional (I liked the way it looked on the hottie bottie cover I made) EXCEPT I misread the instructions and sewed it up with the RIGHT sides together, just as if one was sewing.  Oops.  It has to be done with the WRONG sides together!!  Much unpicking and swearing.  And unpicking Kitchener stitch is not the easiest in the world.  I ended up reknitting one row but in the end, it was worth it.  There's no real "pattern":  I used DK oddments, about 30 stitches.  I did a proper hem at the top which is simplicity itself:
HEM:  Cast on.  Knit 5 rows stocking stitch starting with a knit row.  Sixth row:  knit.  Then k/p/k/p/k the next five rows (i.e. stocking stitch).  That extra knit row is where you fold over the piece and forms the edge.  On the inside of the work, sew in the hem.  Nice, neat edge!
The flower pattern I found on a knitting calendar (!) and suit the cover as they are very small.  The roses I've knitted before (and other flowers) are all MUCH bigger and might have overwhelmed so small an item.  The leaf should have been bigger but I ran out of wool so had to finish it off rather quickly!  The heart button was free in a pack of six with the last issue of "Simply Knitting" (Feb).
Posted by Mad Knitter at 03:46 No comments:

Only a day late!  I've frantically been making a pom-pom for my new hat and wanted to finish it before posting, but golly, making pom-poms is REALLY boring.  Got my daughter to do some winding for me! It's finally finished, though. 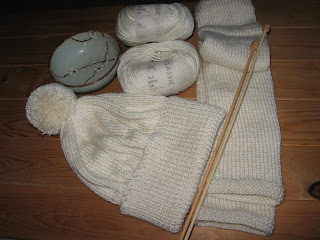 I bought the wool at a sale quite a while ago and didn't know what to do with it.  It was those deliciously long, silky wool wristies from the Hush catalogue that inspired me to knit myself a pair.  They are lovely and soft and very warm!  The hat is a very basic design with cool pom-pom but because of the silk wool, it looks lovely.  What a pity this yarn has been discontinued (from what I can understand) as it's gorgeous. 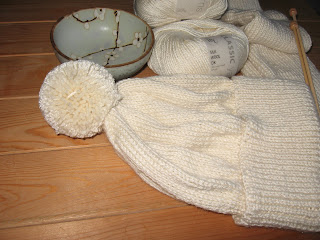 I bought that pretty bowl for myself at a gift shop at Somerset House and gave it to myself for Christmas.  It holds buttons and small knitting bits and bobs on the wooden box. 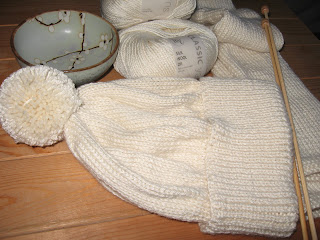 I recently discovered how lovely it is knitting on bamboo needles.  I'm now totally converted!  Does this mean I'll have to rush out and buy ten pairs in all different sizes?
Over most of Christmas, I was knitting my experiment but by old year's day realised that it had gone horribly wrong.  Bit of a sour knitting note to end the year on but then, it was an experiment.  That wool seems to have brought disaster to my poor dear mother as well as myself.  This will be the third project that gets destroyed.  I think I'm going to separate the wool back into a single strand, the way it's meant to be, and then knit a cable cushion cover.  Surely I can't go wrong with that?! 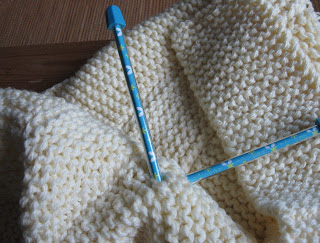 In the meantime, I'm knitting small, easy projects to ease into the new year.  I've completed most of a Kindle cover.  It just needs to be sewn together and lined and decorated.  I've been using scraps for it and have been inspired to do a nearly-matching cafetiere wrap as well as a tea cosy.  Lots of flowers involved which I love doing.  Just hope my stash has enough bits and bobs to cope!! 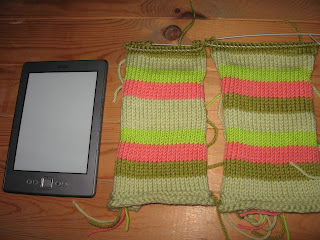