How to make a bobble

Slowly!  Carefully!  Not while watching TV!  I recently started a cardigan that required a row of bobbles at the bottom, which was very pretty.  I spent an AGE doing them and managed to get only one wrong - I somehow ended up with a hole next to the bobble which I had planned to sew closed later.  However, I soon realised that the yarn I was using for the cardigan (it was a substitute) wasn't working and abandoned the work.
I was really please, though, that I'd had a go at making bobbles.  I'd always believed that they were very difficult and that I wouldn't be able to manage, or wouldn't have the patience for them.  But, as long as there aren't too many, it isn't hard at all.  It does require patience, though.  And my top tip is to pull that yarn VERY tightly when finishing it off.  Also, when you knit or purl the next row, knit very tightly again.  And no, I have no idea how I managed to make that hole next to the bobble - obviously I must have forgotten one of the many steps!  Easy to do.
So concentrate!

When is a square not a square?

I just love the colours of the Sirdar Pattercake yarns.  So delicious!  But what do I knit with them?  I couldn't resist the one called Seaside Surprise as it contained all my daughter's favourite colours.  I decided to knit the blanket pattern printed on the inside of the band, though I used two "cakes" instead of one.  I've knitted this kind of square before and knew exactly what was going to happen:  no matter how careful I was with the increases and decreases, the "square" would end up being kite-shaped.  For some unbelievably weird reason (which the more scientific of you may be able to explain), the number of decreases does NOT equal the number of increases.  So although I used two identical balls of wool, the decrease side ended up much longer.  Also there wasn't enough to end it so the last corner looks as if it has been snipped off!
But after struggling for months with dolls' clothes, it was nice to knit something easy and pretty.
My daughter's room has been transformed by the blanket.  With the introduction of the turquoise and aqua colours, the yellow in the room has found a perfect contrast.  Needless to say, the room only looks so lovely because my daughter is at university!  Aside from prettying up the space, the blanket serves no real purpose.  I just like looking at it. 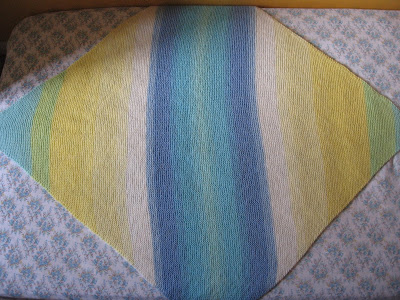 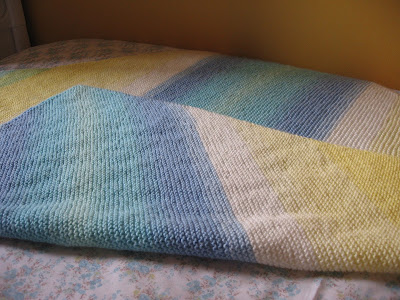 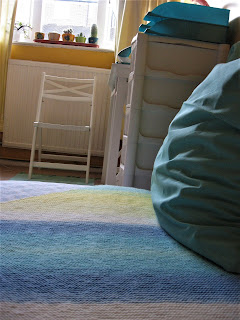 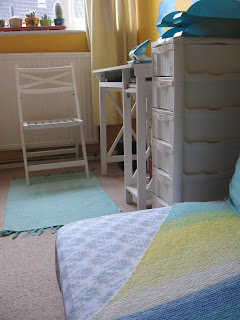 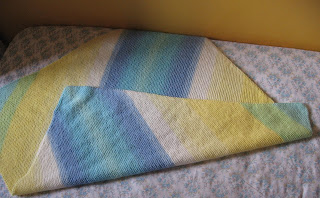 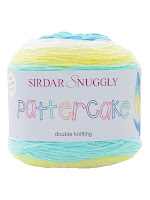 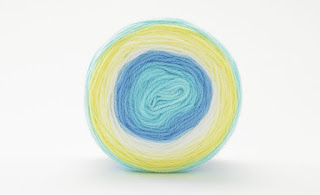 You can still buy the yarn from Deramores here.

As is usual when I ooh and aah over colours in a knitting magazine, it transpires that they are false.  I don't know how many times I've been caught out by this.  I see colours which are lovely;  I order the wool online;  the wool turns up and it's entirely wrong.
There is a lovely rainbow jumper in Simply Knitting 181, knitted with blocks.  I decided to knit it for my daughter, omitting the blocks which I didn't think were necessary.  I thought the rainbow stripes were in soft shades:  red, orange and yellow in spring shades, with a clear turquoise and soft lavender.
Hah!  It's not turquoise at all but emerald green and the lavender is dark purple.  How can they get the colours so WRONG in a magazine?  One could accuse the lighting of altering the shades but the colours on the wool website were exactly the same:  much lighter than they actually are in real life.

I just honestly could not be bothered to send the wool back, although I should have done as it isn't very nice to knit with.  It's fuzzy and the stitches split and tear.  I'm seriously going to be hating it by the time I'm done.  The yarn, in case you want to avoid it, is King Cole's Riot DK and the shade that is so hopelessly wrong is called Chameleon.
This is what it looks like as a (short) scarf: 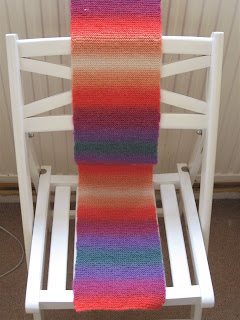 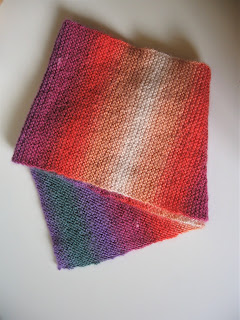 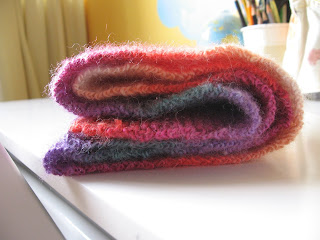 I've also started knitting the jersey but fear I may only finish it next winter as I'm mighty bored.  I've also noticed, to my despair, that the ribbed edge is curling and nothing I do will flatten it.  I foresee a very annoying jersey that my daughter may not want to wear (the wool is quite scratchy and she's a delicate flower, like me!) 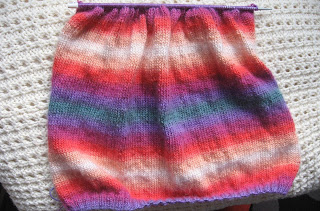 On the Simply Knitting Facebook page is an image of the jersey as it appears in their magazine.  You can see straight away that the colours are different.  There is NO yellow in the image above (taken in harsh February daylight) and the green and turquoise are miles apart.  Yet this is the shade called Chameleon, exactly as I bought it.
Why not buy your wool from a shop where you can see the colours, you might ask.
To which I would answer:  I live in central London.  WHAT shop?? 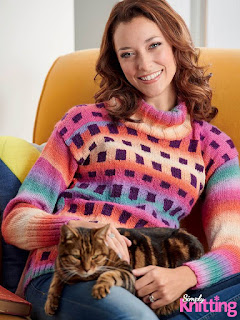 More images of the bluebell dress I made for my doll.
See here how to make the edging. 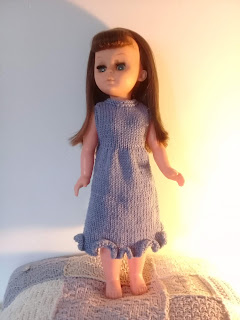 Using the dress pattern I had, I knitted this dress with a frilled edging, a technique I've not used before.  I thought the end result made it look rather like a bluebell!
The most difficult thing was accurately casting on the vast number of stitches!  However many stitches you need for the pattern, you have to start with FOUR TIMES the number!  So I needed 80 stitches for the dress, which meant I had to cast on 360 stitches!  That was a LOT of counting.  I used circular needles, needless to say!
Once you've cast on your stitch number x 4, you knit the first row like this:
Row 1:  K2.  Lift first stitch over second and off the needle.  At the end, you have half the number of stitches.
Row 2:  P2tog.  At the end, you'll have the number of stitches you're meant to have for the pattern - and your frilly edge.
It's not difficult but it is laborious.

I also knitted (from the dress pattern) the matching jacket but wasn't hugely impressed with the result.  The arms don't fit very well.  But the wool I used was pretty:  King Cole Drifter for Baby DK.
Here's the link:  https://www.kingcole.com/knitting-wool/drifter-for-baby-dk/
Either I need to find another jacket pattern or try and adapt this one.

I knitted another cardigan for my doll, this time with matching shorts, headscarf and cute booties.  The cardigan is, once again, the Simply Knitting pattern (for a toy bunny).  The rest comes from a free pattern I found on the Let's Knit website.  The pattern is called Dolly Daydream and this link will take you there:  doll's clothes.
Here she is with the rabbit I knitted.  I think they make great pals!
I had a wee bit of bother with the collar.  I think next time I might knit it slightly differently to the pattern's requirements, perhaps making it bigger (it doesn't lie flat).
I don't remember the yarn I used for this as they were all leftovers in my wool stash, but I can tell you they were all bamboo cotton, lovely to knit with in summer.  (And a very hot one we are having too.) 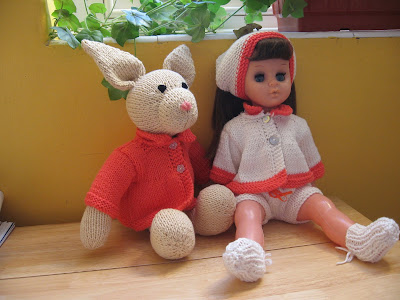 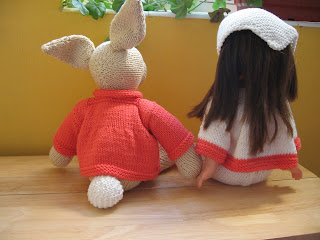 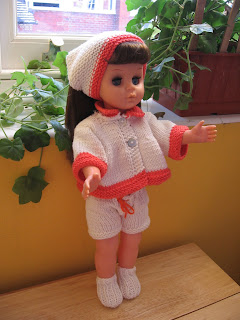 When I spotted this cardi on a toy rabbit in issue 170 of Simply Knitting (first time in years that I had bought a knitting mag), I had an inkling that it might fit my doll.
I worked out recently that this doll is at least 50 years old - possibly older as I think she may have been second hand.  She arrived one Christmas wearing a pink A-line dress (very 1960's) and had a blue pram, which I remember wheeling around the house for years.  My mother had crocheted her a blue granny square blanket, which I've also still got.
The doll came back to England with me as I thought my daughter would be interested in playing with her.  She wasn't, needless to say.  When my mother died 10 years ago, I wasn't capable of doing anything except knitting and sewing clothes for this doll.  I worked without patterns and - since my knitting wasn't very good in those days - the results were sweetly amateurish to say the least.
But at last my doll (and she is mine again) has a cardigan knitted properly from a pattern.  I used an entire ball of Rico Baby Dream DK to make it, including the headscarf.  The latter was a bit small so I've joined the ends (under her hair) with elastic.
The poor doll never had a good head of hair.  Half her eyelashes have gone and she's got a gammy leg .... and this was the state of her when I got her!  But I love knitting tiny things so may get more inventive.  Lucky dolly. 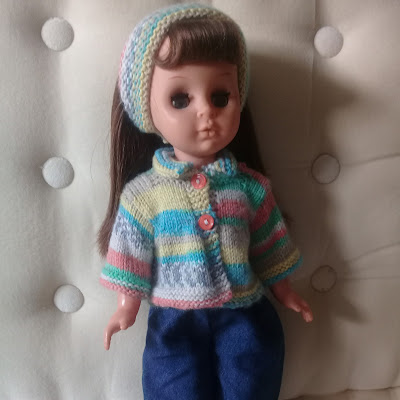