It's done!  Did the Great Knit over the weekend and five rows from the end, discovered an horrendous mistake - a prime example of Bad Knitting!  But never fear, all is - imaginatively - repaired.  More details and pictures to follow.  (Started my new part time job today so time suddenly in short supply...!)
Posted by Mad Knitter at 10:50 No comments:

After several diversions, I'm finally back knitting the yellow jersey for my daughter.  I sometimes wonder if I'm ever going to finish....but I've set myself a target, one that so far, seems impossible.  It has to be done by Halloween!  I'm on the second sleeve and then it's the rib neck which I want to do quite long.  And then there's the sewing up!  I've got less than a week to do this and seem to be knitting less and less every day.  Grrrr.....but I'm determined!  Let's see how I go!
Posted by Mad Knitter at 09:11 No comments: 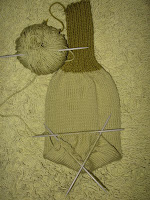 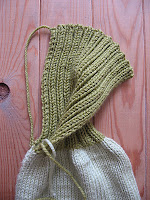 During that recent hot spell at the end of September, I was to be found knitting....yes, a hot water bottle cover.  As one does in boiling hot temperatures!!  Hard to predict that temps are going to hit 30C when it's supposed to be Autumn!
The cover is meant to be knitted on DPNs and despite only ever having one go at it (those stripy wrist warmers from earlier this year...) I thought I'd tackle it.  However, it all went wrong in the first few rows as I got rather tangled trying to knit a rib stitch.  So I gave up and did them on straight needles, thinking that once the rib was done, I'd change to DPNs.  However, it also meant several increase rows and a colour change.  I manage to screw this up as well, so pulled that out and knitted on straight needles until the increases were done, the colour had changed successfully and the rest was just straightforward knitting.
As you can see, this went quite well.  It didn't take long for the "hedgehog" feeling I always get with DPNs to settle down and miraculously, the needles began to behave themselves and knitting was very quick.
You can see by the photo above that the rib part still has to be sewn up.
And then the easy part (had it ever been easy...?!) was over and I had to tackle the decreasing part at the end.  Despite the fact that I seemed to have one less stitch that I was supposed to (perhaps it packed its bags and left home in a huff), I got the decreases perfectly.
You can see the shaping on the photo below...by this time, it was starting to look like a hot water bottle cover!! 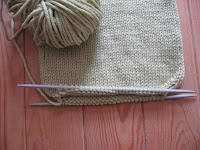 Now came the really interesting part:  I had to get the remaining stitches onto two needles and then attempt Kitchener Stitch.  I've never done that before and thought it might be rather tricky!  However, the fantastic book I've got, Purls of Wisdom, explained it so clearly that I couldn't go wrong.  I concentrated very hard and sat there counting - one two three four - until I had done what had to be done to every stitch.  I was amazed at how neat the grafting was.  I thought there were bound to be some mistakes!  In fact, the only complaint I have is what I was supposed to do with the last stitch!  In the end, I pulled it through to the wrong side and sewed it in, but it made a little bump (which can be seen on the left.)
However, I haven't beaten myself up too much over it - this is the first hottie cover I've done, the first time I've done Kitchener Stitch (or sock grafting).  And my daughter loves it!  It's her "morning" hottie - we somehow have to get through the winter in our bitterly cold flat without turning on the heating for the simple reason that I can't afford to - my fuel bills have shot up so wildly without turning on a hot tap that we won't be able to stay warm.  For once, I wish global warming was just that - warm.  Otherwise we're going to be hugging our hotties all winter long.
That's what the cute pocket is for:  cold morning hands!
The green matches the kitchen!
Next up is a lovely creamy-coloured one for the lounge....
Posted by Mad Knitter at 07:17 No comments:

Two catalogues full of delicious winter woollies have come my way this week.  I can only dream about the contents as they are a tad out of my price range but they have given me some knitting ideas as well.
I really fancy those wrist warmers!  I've seen all sorts but none knitted so finely and so long;  usually they're quite chunky or madly striped or cabled.  Gives me ideas on how to use that cream wool/silk I bought a while ago at the inevitable sale.  Am reluctant to make an actual garment having had so many failures this year.  Perhaps some wristies would be just the thing...
The other catalogue is full of pictures of the Cornish coast which makes me want to move to the seaside at once.  That's me you can see walking down long, cold, wild, windy beaches with my daughter and my dogs and my imaginary man, wearing my big sheepskin boots and cool jeans and cable socks, seriously gorgeous knitwear keeping me warm, along with log fires, big stews and bookshelves full of my published novels....well, that's my idea of heaven, anyway.  In the meantime, I'll just make do with my dreams.
Posted by Mad Knitter at 08:21 No comments:

At last Autumn is upon us:  cooler mornings, fresher evenings, clearer skies (well, sometimes, given the endless grey of London) and a chance to wear my new Gedifra top....only to find that it doesn't really fit!  Grrrrr!  It's not just the tight casting off at the lower edge, but also the fact that it's a tad too short.  And the wrong shape.  But let's not go there because I can't fix that.  So MORE unpicking coming up.  This must the most unpicked item I've ever worked on.  Is it worth, I ask myself.  I only have to look at the delicious colours to convince myself that it is!  So I'm going to undo those hems and keep knitting until I run out of wool.  Haven't got much left and I'll have to add a lot more pink.  Am I heading for disaster?  Could it get any worse than it already is?
Do I just want to go away and knit something else?!
I could knit myself a man....has anyone else seen the utterly gorgeous bloke on the front cover of Rowan's Dalesmen?  All wild and brooding and blue eyes....now there's someone I'd sweat over complex cable for.  I wonder if I can grab a piccie of it from somewhere.... 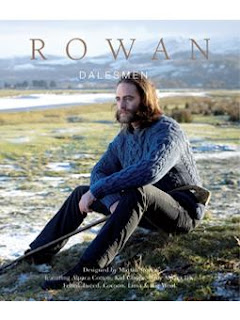