Yes, it's finished!  Hip hip and many hoorays!!  This deserves a gigantic photo: 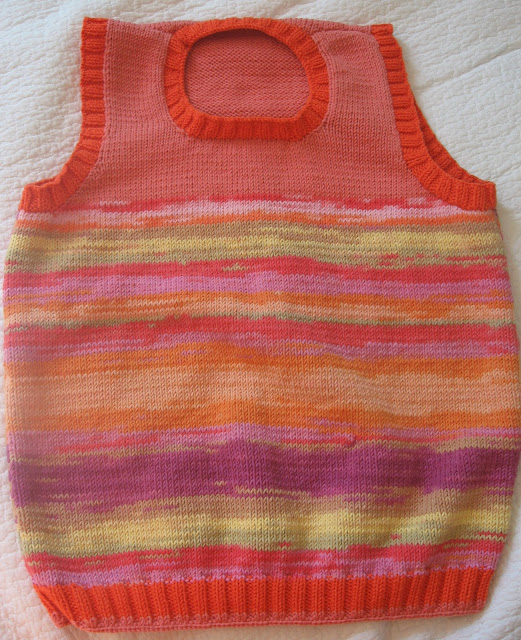 I thought the Amy Butler's belle organic aran by Rowan blended it really well with the Gedifra Fiorista - and what a shame they aren't making that any more!  The orange rib gives it a nice funky look.  This is definitely a top to wear on dull days, of which we have had many.
RIB:  This is the best attempt I've ever made at picking up stitches along the edge and knitting a rib.  I have the book Purls of Wisdom to thank for that as I never really got it before.  The neck rib was quite hard, though - I did the usual mistake of picking up too many stitches so it didn't lie flat and looked, well, ridiculous.  Also, I didn't pick up the stitches that well and there were several holes.  A second attempt and it's perfect.  (Or perfect in my world of Bad Knitting anyway...)
WAIST RIB:  I originally wanted the bottom edge to have no rib as I'm quite fond of those jumpers that curl up.  I have one that does that and love it.  However, the curl on this top hid the beautiful colours and just looked messy, so I thought, with a sinking heart, that I was going to have to add a rib to it.  I first took the easy way:  I picked up stitches and off I went.  FAR too many stitches, I realised once again - the hem was going to stick out like a frill!  So pulled it and started again.  Was well away when I realised (many, many realisations with this creation) that though I'd picked up the stitches neatly, each one had made a hole.  It just looked awful.  There was only one thing for it - I was going to have to pull unpick the cast-on edge, pick up proper stitches and knit upsidedown.  Has anyone ever unpicked a cast-on edge?  Is there a special way to do it that isn't soul-destroying, that doesn't take years, that doesn't fray the wool??  The Gedifra, which is multi-stranded, was as frayed as my nerves before I was even halfway.  I was virtually in tears before I'd reached the end of unpicking the back.  I thought I'd made a terrible mistake and that it was all disastrous and that this bloody top was costing me a fortune, what with having to buy rather expensive Rowan to make up the shortfall, when it was supposed to be a sale knit.
SUCCESS:  However, once I started knitting, it was obvious that my hard work had paid off.  The stitches are all twisted on the first row and there seems to be an odd sort of dent but it's on the back, so less noticeable.  I made sure I didn't make the same mistake on the front and it turned out beautifully.  I'm also rather pleased that my mattress stitch has come on so well - it sewed up so cleanly that it almost looks as if there is no seam.  Knitting in the round, ho ho!
(Once the heatwave breaks and I actually get a chance to wear this, I might be brave enough to post a picture of me wearing it!!)

Look what I won!! 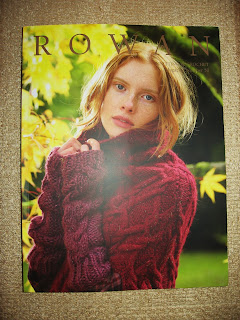 While my knitting efforts go from bad to worse, I've managed to win myself the Rowan Knitting Magazine Number 50 just by entering a crossword competition in Simply Knitting!
Wow!!!
Completely unexpected!!!

In the meantime, the yellow heart pattern jersey is still going...and going...and going.  Forever, it seems.  As for the Gedifra multi-colour beautiful top....I don't think that's ever going to be finished.  I've pulled out bits of it so often that it's turned into a disaster zone.  And I just know that when I'm done it's going to end up stuffed in a drawer and never worn.
Woe.

In the meantime, here are some lovely pictures taken from the knitting book.  I think I might like to rush off to this forest (The National Arboretum at Westonbirt, Gloucestershire) and live under a tree for the rest of my days.... 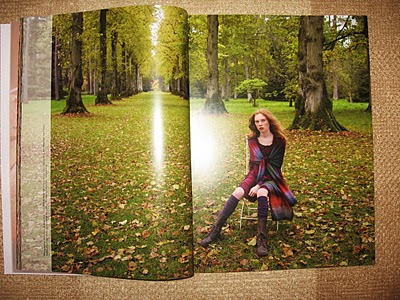 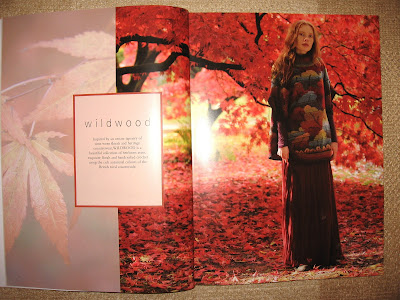 The Queen of Bad Knitting

Someone knit me a tiara so that I can crown myself the Queen of Bad Knitters.  I've spent DAYS working on the neck rib of that very colourful vest top and this morning I finished it at last.  I loathe doing neck ribs.  I've never done a successful one and it always seems to be the final downfall of a jersey.  At least I've managed to learn how to pick up edge stitches (for the most part) and with much concentration, can keep up a knit 2, purl 2 over ten thousand stitches (definitely no watching TV while that's being done.)  So it was with great relief that I finished it at last....only to find that I'd included the shoulder seam in the neck rib!  I'm going to have to pull out days of work and do it all over again.  Aaaaaaargh!
On top of which, I baked a banana bread this morning, my daughter's favourite.  I've made it a thousand times before and can virtually make it in my sleep.  Every error I've ironed out, including never using a cooking margerine in place of butter.  Today the loaf came out beautifully....for ten seconds only, and then utterly collapsed into a squashy, sticky, dank bread.  Too many bananas, said my daughter.  Bananas too overripe.  Well, what else am I supposed to do with overripe bananas.  Perhaps we should try eating them before the humid weather does its thing.
It's been a very trying day.  A saxophonist has moved into the area and has spent all weekend doing scales.  People are starting to hang out the windows yelling "stop!" (and several other words I use myself, though generally under my breath.)
But I did buy some new wool this weekend!  Though before I get onto that, might I just mention that John Lewis (Oxford Street, London) has changed its haberdashery and wool section.  It used to be right next to the lovely open central well so that you could take your wool over to the natural light and inspect its colour.  It used to feel very spacious and relaxing.  The whole section has now been shoved into an area smaller than a dog's nostril with horrible spotlights that hit you in the eye every time you lean forward to inspect the wool.  The shelves of wool are also very ugly:  all the wooden ones are gone.  And there's less.  Of course there's less.  On top of which, the sales assistants were unbelievably rude, which has to be a first for John Lewis.
My loathing of John Lewis has hit an all-time high.  It's such a pity that I feel tied to the store because there's no one else who does anything similar.  I wish we had a giant wool shop in the middle of London.  Am I the only Londoner that knits?  Is everyone else a slave to the internet?  Happy to get the wrong shades when ordering on-line?
Anyway, new wool for a hottie bottie cover for my daughter:  couldn't find Rowan cashsoft aran (apparently it's been discontinued) but did get some lovely Debbie Bliss cashmerino aran in two shades of green.  Broke the bank a bit, but then my bank is already broken so don't really care any more.  Will be knitting the entire thing on DPNS.
Aaaaaaargh.
Posted by Mad Knitter at 09:13 No comments: 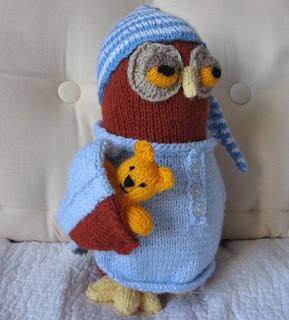 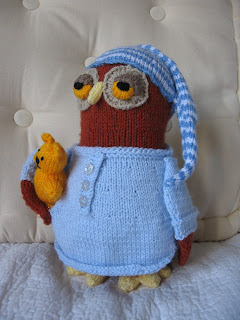 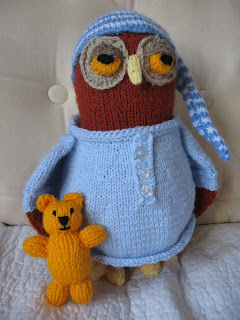 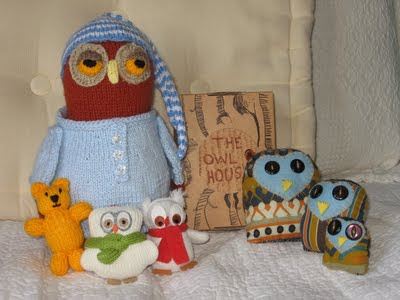 I'm watching The Killing for the second time...it seems to resonate more when you know who the killer is.  I remember the first time I watched it, I was so utterly enthralled that I couldn't knit a stitch.  I would put my knitting down for the evening and that was that:  gripped for an hour and then entranced by the end-title music that would keep playing in my head even after I'd gone to bed.  It says something for my knitting at the moment that I'm NOT putting it down during the rerun.  Endlessly boring stocking stitch.  I'm back knitting the yellow jersey for my daughter and have run aground on the shoulder.  How can this happen?!  I've used this pattern before and had no problem!
Can't wait for the second series to start later this year.  It's truly the only worthwhile thing on TV at the moment!
As for the US version....oh dear.  I tried very hard not to condemn it just for being American, but being American is everything that is wrong with it.  Its predictableness has nothing to do with the fact that I know what's going to happen (or not, as they've changed the ending, apparently), a fact borne out by the rerun of Forbrydelsen still being exciting the second time around.  The characters, their reactions  and the situations they find themselves in are so stereotypical of every other US cop show that I'm half dead with boredom before the titles have even finished.  No problem with difficult knitting, then, when it's on.
And for those of us who haven't a hope of knitting something so gorgeous, here is Sarah Lund's jersey:
Posted by Mad Knitter at 09:41 No comments: