I haven't blogged for a long time, I know.  It feels like months!  I've been having a bit of a knitting crisis.  It's the one that goes:  everything I knit is rubbish!  I'm a really bad knitter!  I haven't improved one iota in the last few years!  I just want to knit easy stocking stitch so that I don't have to think in front of the telly!  I'm a blob!
You can see where this is going!  But it's true that I have been having some difficulty with my knitting and have lost confidence somewhat.  Perhaps everyone goes through this.  Perhaps I knit too much.  Perhaps my Real Life (the one that knitting is supposed to take me away from) is impinging on my wool space.  (Or should that be yarn space?!)
I finished the hot water bottle cover I made out of that leftover Bad Yarn - that's the cream stuff that I had to unravel from being double-knitted, out of which I did manage to make a halfway decent at-home cardie.  Although I did wear it to work once - can't say that anyone noticed but then it isn't that sort of job.  It might not be the most beautiful cardigan in the world, but it's very warm. 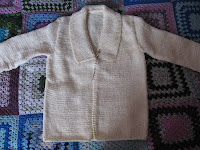 The hot water bottle, in the same weird, stiff acrylic yarn knitted up very neatly, I thought.  In fact, the finished product looks really good EXCEPT I didn't realise the yarn was much thicker than the DK required.  How could I not have realised?  Didn't I notice I was knitting with bigger needles?  So the final product is, in fact, a gigantic hot-bot cover, a cover of immense proportions, one that slides around all over the place and is just thoroughly ridiculous.  What an embarrassment I am to myself.

In meantime, I've also finished the long, striped cardigan for my daughter.  That went very well indeed, though I did get rather irritated having to change colour every four rows for the sleeves!  It was an easy enough pattern and very easy acrylic to knit with.  What could possibly go wrong?  Well, it was my first cardigan with a border and I managed to pick up TOO FEW stitches along the front for the border, resulting in the pulled-up look you see in the photo.

Keenly feeling the disappointment of these two "failures" (the fact that the hot water bottle cover is used every day is neither here nor there, nor is the fact that my daughter loves her cardi as it's long and warm), I decided it was time to confront my biggest disappointment of all.
Sirdar Tweedie Chunky in Honey Yellow.
Needless to say, it has been discontinued and all I can say is thank goodness because it's horrible stuff.  I saw a pattern in the November 2010 issue of Knit Today of a lovely hooded cardigan and was quite won over by it.  The Honey Yellow looked like a lovely colour and the sample shade in the magazine was identical to the one on the on-line shop.  That's TWO places where the colour was the same - you'd think that would be the colour you'd get?  I bought this for myself as a birthday present two years ago so imagine my disappointment when the huge parcel turned up with this grungy dull mud coloured wool.  Feeling disinclined to return it as it was my birthday present and it was too late to buy anything else (shopping around Christmas time for birthday presents isn't easy), I convinced myself that it would look better when I knitted it.
I then proceeded to knit it about five times, starting it, pulling it out, starting it again.....first I couldn't get the basic rib right and kept making mistakes.  Then I battled with the cable pattern.  It seemed impossibly difficult and after much blood, sweat and tears, I gave up.  It was almost spring and I didn't want to be knitting in an ugly, mud-coloured yarn that was depressing and felt like string to boot.  So I abandoned it for nearly two years, picking up again recently, having thought a great deal about it.  I decided I just needed to concentrate harder, to use lots of stitch markers so that I didn't get lost with the cable and to use nice bamboo knitting needles.  The latter proved to be too sharp and kept snagging the wool.  And the cable pattern, which I managed to master (it was quite easy) look terrible.  Despite trying to knit as tightly as I could, it laddered very badly. Naturally I blamed the yarn and shoved the whole lot back into my wooden box, abandoned once more.
But why not just abandon the cable??  What I good idea, I thought.  So after much research and studying my previous creations, I decided to knit the whole thing in Mistake Rib (which, I hope, has other names.)  I thought this would make it chunkier and less likely to show up the laddering effect that this yarn seemed to produce.  HAH!  It's not called Mistake Rib for nothing!  Despite never having any problem with it before, I just could not see what I was doing with this tweedy yarn:  I couldn't see the pattern, which meant I kept losing myself.  Which meant, of course, that I made thousands of mistakes.  Grimly, I kept going, sure that you wouldn't really be able to see the mistakes if you didn't look too closely.  I finished the entire back, shoved it in my wooden box and abandoned it.
Again!
Finally, I realised I was just going to have to knit a boring cardigan out of it, no pattern, no cable, nothing interesting at all.  What else am I supposed to do with this wool??  It can't sit in the box forever.  I hate it but perhaps it will be warm.  Yet ANOTHER poor quality home cardi.  Aaaaargh.
So far I've finished the back, two fronts and am halfway with one of the sleeves.  The colour continues to be muddy.  The yarn continues to feel like rough string.  There's nothing about it I like.  But I'm knitting and sometimes I just need to knit.  Perhaps it doesn't matter what I knit as long as I don't go entirely mad......

The colour is actually called Grouse.  Indeed.  That's just what I feel like when I knit.  An old grouse, grumbling in the corner.  I think my next project needs to be seriously orange or purple or something....