As projects go, this one went quite easily, despite the fact that I decided to knit a bigger size AFTER I'd finished the back.  Studying the pattern picture closely, I realised it wasn't going to have enough swing and I didn't want yet another knitted item that felt too tight under the armpits (despite knitting the right size!)  So I had to pull out the back and start again.  I also made the ribs a little deeper which meant, of course, that I ran out of wool just before the end! 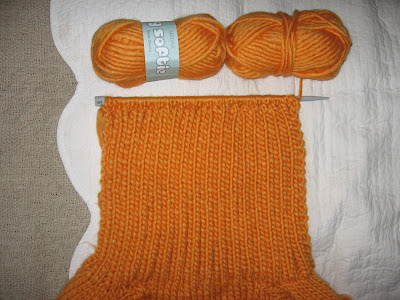 Fortunately, when I ordered two more balls from The Black Sheep, I could actually specify which dye lot I wanted, an unexpected service!  So I didn't have to worry about the shades not matching.  I actually finished it this weekend.  Spent hours and hours sewing it up, probably longer than I spent actually knitting the thing.  I then cried after I tried it on because it doesn't look very nice.  The sleeve seams kind of fall down my upper arm a bit (you think it might be too big?) and somehow it just looks like, well, something someone knitted, and not very well, with rather cheap wool.
I'm not entirely sure why I bother.  Do you think if I called myself "The Good Knitter" I'd be better at it?
Posted by Mad Knitter at 06:20